THAT TIME OF THE YEAR GUYS! 2016 wrap up in which, I contest to my utter failure as a reader.

Wow, I’ve only read 38 books this year. Not even in the forties! This is a long way down from the 55 books I read last year. Though on the bright side, almost all of the ones I did read were good.

The two books that stole my life and killed my soul and broke my little heart that gets way too attached to book characters:

Awesome introduction to a new series that I’ve already started to fall in love with:

Great conclusion to a series I am in love with:

The Sun is Also a Star by Nicola Yoon

When the Moon Was Ours by Anna-Marie McLemore

Introduction to series with a lot of potential: 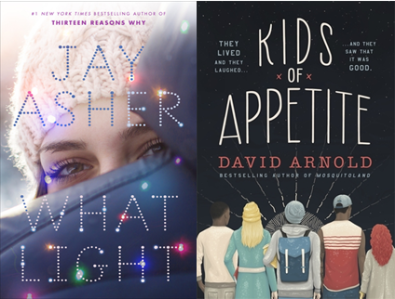 What Light by Jay Asher

Heartfelt story about friendship and loyalty and what it means to be different:

Kids of Appetite by David Arnold

Coming out stories that made me want to hug the characters and never let go (also known as two of the longest titles in YA):

Based on A Thousand and One Arabian Nights that have similar premises but distinct characters and writing styles:

The Wrath and the Dawn by Renee Ahdieh
A Thousand Night by E.K Johnson

Magical realism that is strange and beautiful:

The Strange and Beautiful Sorrows of Ava Lavender

Love, loss and the importance of mental health:

All the Bright Places by Jennifer Niven

Dragons at its finest:

What better time to give away books than the end of the year?

1. United States ONLY! (Sorry to everyone living in the foreign lands!)

**Keep in mind the copies I’m giving away are ARC copies. There may be slight evidence of wear since I’ve read them first.

3. I will contact the winner with the e-mail address provided. If the winner does not reply within two days, someone else will be chosen.

What was your favorite book you read this year? What book are you most excited to read next year?