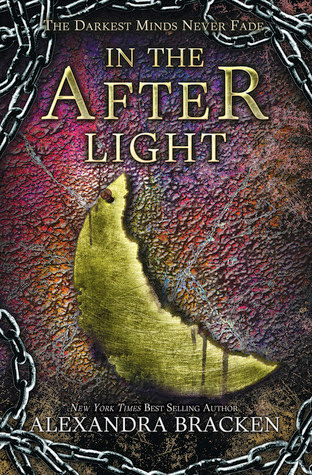 Warning: In The Afterlight is the third and final book in the Darkest Minds series.

Ruby can’t look back. Fractured by an unbearable loss, she and the kids who survived the government’s attack on Los Angeles travel north to regroup. With them is a prisoner: Clancy Gray, son of the president, and one of the few people Ruby has encountered with abilities like hers. Only Ruby has any power over him, and just one slip could lead to Clancy wreaking havoc on their minds.

They are armed only with a volatile secret: proof of a government conspiracy to cover up the real cause of IAAN, the disease that has killed most of America’s children and left Ruby and others like her with powers the government will kill to keep contained. But internal strife may destroy their only chance to free the “rehabilitation camps” housing thousands of other Psi kids.

Meanwhile, reunited with Liam, the boy she would-and did-sacrifice everything for to keep alive, Ruby must face the painful repercussions of having tampered with his memories of her. She turns to Cole, his older brother, to provide the intense training she knows she will need to take down Gray and the government. But Cole has demons of his own, and one fatal mistake may be the spark that sets the world on fire.

You know those book series where you get to the last book and there are so many different characters that authors shove some of them aside to better fit their plot? Or just make them do things completely out of character and so against their personalities that you start to wonder whether or not you’re reading a fanfiction? Or that feeling you get when you finish the series and there are way too many questions left unanswered that you feel like it cannot possibly be the last book? If you’re worried about any of that from happening in this book, take a deep breath and let it out because this book was ABSOLUTELY INCREDIBLE!

I didn’t think it would be possible for Bracken to pull off this ending with all these characters still intact and wholly themselves but she does and she does it well. This was exactly the book I needed to restore my faith in trilogies. I fell in love with these characters and I wanted to see them thrive and they did. Everyone played their own part whether it was big or small.

I was scared of my expectations for this book because I expected greatness but Alexander Bracken (as usual) did not disappoint. If you haven’t read it yet, do it now!

First, let’s start off with the negatives. Some people were complaining about how the book was slow and dragging towards the middle (which is true) but I felt like the book needed it. Never Fade was very action packed with only a few moments where the characters actually got to relax and plan their next step which is exactly what happened in this book. These characters needed a little break from all the fighting anyway and it gave time for a lot of character development.

The only parts I didn’t like (or more, the parts that frustrated me) were the ones with Ruby completely cutting Liam off. She kept going off to Cole (who is actually pretty cool) without giving Liam a reasonable enough explanation. I was yelling at her in my mind throughout the whole ordeal, seriously Ruby, COMMUNICATE! I felt so bad for poor Liam! Also the fact that Cole didn’t tell Liam about him being a Red until almost the end was so annoying! It could have really improved their relationship and Liam would have definitely understood Cole’s need for secrecy.

Ruby developed so much as a character. She is very different than she was in the beginning of the first book completely terrified by herself; I loved seeing how confident she became and how in control of her power she was at the end. I was actually glad when she decided to go back to Thurmond, I thought she needed that closure and she probably thought so herself. The books started with her being taken to Thurmond and ended with her going back to get everyone out (that right there is great planning). I was also so overjoyed to see Sam again! Ruby fixed her mind and she remembered Ruby and it was just so sweet! And she found her grandma! Or rather her grandmother and parents found her; it was a great reunion!

And let’s just say Vida and Chubs is PERFECT! I totally saw it coming in Never Fade! I think I love them more than Liam and Ruby. The scene where Vida gives Chubs his glasses all fixed up, it was adorable!

The reunion with Zu! I was wishing so hard they would find Zu and they did. When Ruby first saw her and was describing how weak she looked, I almost cried. Sweet little Zu, they shouldn’t have let her go in the first place! And the interview she gave with Alice was marvelous. She spoke! She SPOKE! (And Vida was the one who encouraged her)! I cried; I really did.

Like I said before, Cole’s pretty cool and I do like him but if any main characters had to die, I’m kind of glad it was him. I am way too attached to the other characters to handle their deaths.

And Clancy. Stupid, idiotic, manipulative, devil child Clancy. Ruby really should have known better than to believe he was under control and would just sit in a cell doing nothing. Come on Ruby! Learn! It’s Clancy freaking Gray! When did he ever sit around and do nothing!? Of course he had a plan! I would have been surprised if he didn’t. BUT learning more about his past, I did feel the tiniest bit of sympathy for him.

Which brings me to Nico. I was VERY VERY VERY mad at him in the last book because of poor Jude. In the Afterlight made me start to love him though. He believed in Clancy, he knew him before he went all psychotic power-hungry teenage Voldemort. Nico loved him and love clouds judgments. I liked how in the end Nico went and started yelling at Clancy and I got all hopeful because Clancy seemed like he was going to listen. I think he might have if his stupid mother hadn’t burst in. Mother Gray! Couldn’t you wait another minute?

Ruby wiping Clancy’s memory was an act of mercy. That was a good thing and it probably saved a lot of people from falling in the other end of his manipulations.

The last scene where they were coming out of Thurmond was EPIC! Absolutely, positively AMAZING! How the thousand of kids got out of camp and the parents came out (go Liam’s idea!) and the soldiers stood down. *satisfied sigh* It was good. Just so good.

And Chubs. Oh my goodness, Chubs! He was great at the meeting at the end arguing about the Psi-kids’ rights. I was so proud!

Overall, this was the best ending of a series I have read in YEARS. Maybe since Harry Potter. Bracken’s writing is so elaborate and beautiful it’s hard not to love these books. I cannot wait until she publishes something else because I will definitely be reading them.