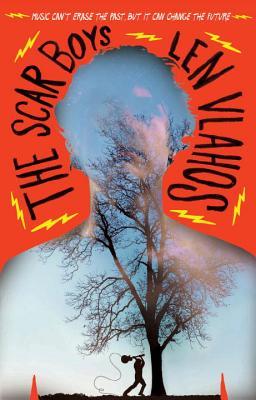 A severely burned teenager. A guitar. Punk rock. The chords of a rock ‘n’ roll road trip in a coming-of-age novel that is a must-read story about finding your place in the world…even if you carry scars inside and out.

In attempting to describe himself in his college application essay–help us to become acquainted with you beyond your courses, grades, and test scores–Harbinger (Harry) Jones goes way beyond the 250-word limit and gives a full account of his life.

The first defining moment: the day the neighborhood goons tied him to a tree during a lightning storm when he was 8 years old, and the tree was struck and caught fire. Harry was badly burned and has had to live with the physical and emotional scars, reactions from strangers, bullying, and loneliness that instantly became his everyday reality.

The second defining moment: the day in 8th grade when the handsome, charismatic Johnny rescued him from the bullies and then made the startling suggestion that they start a band together. Harry discovered that playing music transported him out of his nightmare of a world, and he finally had something that compelled people to look beyond his physical appearance. Harry’s description of his life in his essay is both humorous and heart-wrenching. He had a steeper road to climb than the average kid, but he ends up learning something about personal power, friendship, first love, and how to fit in the world. While he’s looking back at the moments that have shaped his life, most of this story takes place while Harry is in high school and the summer after he graduates.

Don’t judge a book by its’ genre is a lesson I am starting to understand. I have only recently started reading more contemporary books and they’re actually not all that bad. I went into this book expecting it to be a two star, three at most. So when it ended up being four star worthy, I was joyous!

Harbinger (Harry) Jones went through a traumatic childhood experience in which he was tied to a tree during a lightening storm. On top of that being absolutely terrifying, he was literally and metaphorically scarred for life. His face was deformed and he was forever cast an outsider.

The Scar Boys is basically Harry’s story of how he became comfortable with himself. It’s about society and what being different really does to someone’s confidence. It’s about friendship and how much impact friends have on your identity. It’s a search for identity story told through a college admissions essay.

Short review, I know. Read it though!