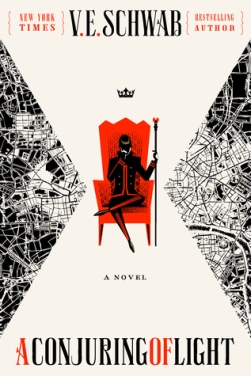 Oh. My. Gosh. I finally FINALLY read these and this series is freakin’ fantastic! I was going to start beating myself up for reading the trilogy so late but then, I think I did myself a favor since I was able to read all three in a row instead of having to wait years. The Shades of Magic trilogy is everything I hoped: intriguing, complex and simply magical.

I fell in love with this world (or rather, worlds). The concept that there are four different worlds all connected by the constant city of London. And more than that, I adored the characters. This series has both a plot driven and character driven story.

This was also my first attempt at a V.E Schwab book and I’m a fan. Her writing is descriptive without being monotone and she has the perfect balance of show vs tell.

On to the reviews! The later books will have spoilers for the previous one so if you haven’t read the entire series, feel free to skip the later books.

“I’d rather die on an adventure than live standing still.”

A Darker Shade of Magic was a thrilling introduction in this fantastic journey. Here, we meet Kell, an Antari – the only one in his world who can travel between the three Londons. He’s the adoptive son of the King and Queen of Red London and brother to prince Rhy. And we also meet Delilah (Lila) Bard, a wanted thief with too many knives and a seeker of adventure.

Schwab is a pro at world building, she doesn’t shove this new world down our throats but transitions us slowly.

My favorite thing about this book is the witty banter between Kell and Lila. I love humor and action in my Fantasy books and this one delivers. I also love a slow romance, no insta love and no love triangles. Their relationship isn’t really a romance, they’re just two people who have crossed each other’s paths and decided to go on a journey together. I appreciated their bond, their friendship.

Rhy, even thought he was absent most of the book, was by far my favorite character. We mostly see him through Kell’s eyes but even then, it’s obvious he is a kind and genuine person.

“She bent most of the rules. She broke the rest.”

My favorite out the three books, A Gathering of Shadows is the perfect sequel. You know what I love best in Fantasy books? Epic magic duels. I LOVE super powers and I love it even more when we get to see people fight with said super powers. Most of A Gathering of Shadows revolves around the Element Games, a tournament where the best magicians of the three kingdoms come together and the best magician earns the glory of the championship.

Kell and Lila are separated during most of the book and I absolutely loved it. I loved seeing them grow as characters. Kell is having to deal with a level of distrust from the King and Queen because of his previous smuggling habit as well as the knowledge of what he did to Rhy. Lila is getting used to living in a world full of magic and new rules.

All the new characters who were introduced are lovely additions, Alucard especially. He’s hilarious! If I thought I liked Lila and Kell’s banter, I love hers and Alucard’s even more. 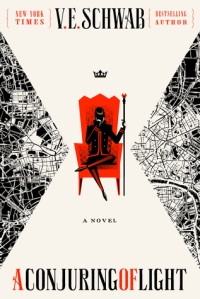 “Life isn’t made of choices, it’s made of trades. Some are good, some are bad, but they all have a cost.”

I was a pile of crumbling mess after finishing this book. How am I expected to move on now? This one broke my heart and then tried to piece it back together but it was too late because my heart was already shattered, just whyyy.

The plot was on point. The characters were all present and perfect in their own imperfect ways. The fights were wonderful as usual. It was action packed with the occasional humor thrown in.

If you haven’t read the conclusion yet, just know that it’s fantastic and skip these later paragraphs.

SPOILERS SPOILERS LOTS OF SPOILERS AHEAD!!

(This is not going to be very coherent, I’ll just warn you now)/

AHHHHHH, all these deaths, I CANNOT EVEN! Every side character I loved died?? And I loved all the side characters and they’re all pretty much dead. And the characters who survived are left damaged and heart-broken and it HURTS.

Kell and Rhy’s relationship is so nice! I love their brotherly duo and for a while, it almost seemed like they would beat Heronstairs which is high praise! (They didn’t but almost).

Rhy and Alucard are so darn adorable! The way Alucard stayed with Rhy when he “died” and then Rhy stayed with Luc when he was almost possessed! Their relationship is so nice and I’m so very glad Luc didn’t die on that ship. My poor Rhy has lost enough people.

I also just love all the little character interactions between everyone. How Lila was basically the first person to trust Rhy on his own. How Kell and Alucard have finally agreed to not hate each other after Alucard told Kell the real reason he left. How Holland was the one to save Lila and while that wasn’t enough for her to like him, she at least tolerated him from there on. Hastra and Kell’s conversations and how he seemed so eager to show Kell how he can grow a plant. Lenox and Lila and how he finally seemed to be comfortable around her. ALL THESE CHARACTERS ARE JUST SO BRILLIANT.

HOLLAND NOOOO! I was so hoping he would end up surviving, that poor man has gone through so much! And he still had the strength and the courage to keep going and fight against evil even though he had so many reasons not to.

The last scene with King Maxim and his iron soldiers was awesome. He literally created his own army just so he wouldn’t have to ask his people to sacrifice themselves. I’m still angry at him for blaming Kell for so long but I have to admire his strength.

Can we have a slow clap for the wonder that is Tieran? That man is the Dumbledore of this trilogy except much more helpful and is actually there for the main characters when they need him.

I so wanted to give this book five stars except it left some unanswered questions that I thought would be resolved by the last book. Schwab was probably just wanting to leave some things ambiguous but I really like closure.

Things I needed in this book:

Have you read this series? Are you planning to? What other Victoria Schwab book would you recommend?