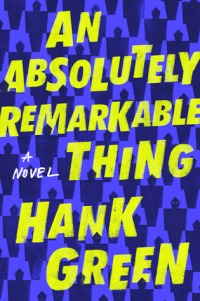 The Carls just appeared. Coming home from work at three a.m., twenty-three-year-old April May stumbles across a giant sculpture. Delighted by its appearance and craftsmanship–like a ten-foot-tall Transformer wearing a suit of samurai armor–April and her friend Andy make a video with it, which Andy uploads to YouTube. The next day April wakes up to a viral video and a new life. News quickly spreads that there are Carls in dozens of cities around the world–everywhere from Beijing to Buenos Aires–and April, as their first documentarian, finds herself at the center of an intense international media spotlight.

Now April has to deal with the pressure on her relationships, her identity, and her safety that this new position brings, all while being on the front lines of the quest to find out not just what the Carls are, but what they want from us.

The book that finally got me out of my massive reading slump, An Absolutely Remarkable Thing by Hank Green. Going into this book, I was hesitant. I love Hank Green as a person, I’m an avid follower of the Vlogbrothers and everything they do for charities every year. And of-course I’m a fan of Hank’s brother, John Green’s, books. So when Hank announced his book, I was nervous that I wouldn’t like it. That was all for naught though because An Absolutely Remarkable Thing was absolutely remarkable.

April as a main character is not perfect. She’s a character with a lot of flaws, most of which she will admit to having and it made her that much more relatable. She has commitment issues, she’s reckless, a little impulsive, but she’s lovable despite her flaws.

April May, after a long day at work, encounters this giant statue in the middle of a New York street. She first walks right pass the statue but then decides she would be more appreciative of street art so she gets her best friend Andy to take a video of her fake interviewing the statue she then named Carl. Little did she know, there were hundreds of other Carls who appeared at the exact same time in other cities around the world. Her video quickly goes viral because she is the first to upload a video with Carl and thus starts April May’s adventure.

This was also a very real despite being science fiction. The book talks about the effects of social media and all the positives and negatives that come from it. It talks about the effects of fame and how it can be addictive and lonely and how much it can change a person over time. We get to see April’s rise to fame. April May goes from a person who really isn’t into social media to someone who thinks obsessively about every video and every tweet she sends out. I thought that was relatable to everyone who has ever grown even a small following online, you end up thinking about what kind of posts will get the most likes, what will end up the most popular, etc.

I am so glad I loved this book. Hank did an incredible job balancing the sci-fi aspects with every day life. The book works well as a stand-alone but there are a few questions left unanswered which paves the way for the sequel.

7 thoughts on “Review: “An Absolutely Remarkable Thing” by Hank Green”