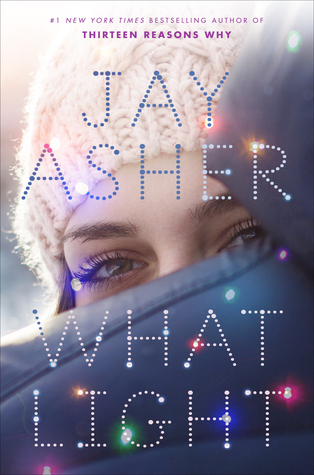 Goodreads Synopsis: Sierra’s family runs a Christmas tree farm in Oregon—it’s a bucolic setting for a girl to grow up in, except that every year, they pack up and move to California to set up their Christmas tree lot for the season. So Sierra lives two lives: her life in Oregon and her life at Christmas. And leaving one always means missing the other.

Until this particular Christmas, when Sierra meets Caleb, and one life eclipses the other.

By reputation, Caleb is not your perfect guy: years ago, he made an enormous mistake and has been paying for it ever since. But Sierra sees beyond Caleb’s past and becomes determined to help him find forgiveness and, maybe, redemption. As disapproval, misconceptions, and suspicions swirl around them, Caleb and Sierra discover the one thing that transcends all else: true love.

What Light is a love story that’s moving and life-affirming and completely unforgettable.

I received the ARC of What Light for winning YA Trivia at b-fest in Barnes and Nobles. I was super excited when this came in the mail because I love Jay Asher!

If you read YA contemporary than most likely you’ve read Thirteen Reasons Why by Jay Asher. What Light is not nearly as emotionally heavy. It’s pretty much a typical- girl meets boy, they fall in love, there are some obstacles- love story. I don’t know if it’s an unforgettable love story but this was definitely one of the cutest things I’ve read in a while.

Sierra lives two lives, her life at home in Oregon where they own a Christmas tree farm and her life in California during Christmas where her family sells their Christmas trees. They haven’t been making as much profit lately so her parents think this year may be their last Christmas in California.

Female Friendships. Sierra has friends who are girls. THREE of them. How often do you see female MCs in YA having female best friends? Who talk and hang out and are basically nice to each other? Not often. (Granted I don’t read a lot of contemporary so I might have just missed a lot of books). Seeing Sierra spending time with her best friends was a nice change from the female drama that usually happens in YA.

No Insta-Love. More like insta-infatuation that led to love. Caleb has a bit of a reputation around town and most of the other kids tend to avoid him. It was nice to see how Sierra tried to get to know him first and didn’t just jump into the rumor train. Their relationship progressed gradually and realistically. And Caleb is honestly pretty awesome.

Parents! She has parents! Sierra has both parents who love and support her and she actually listens to them. Shocking, isn’t it!? Parents are probably one of the rarest things in YA. Sierra’s mother and father have a huge presence in her life which is always interesting to see.

The plot felt a little generic. Like I said before, it’s a typical love story which is fine. It was still cute, there just wasn’t anything new.

4 thoughts on “ARC Review: “What Light” by Jay Asher”