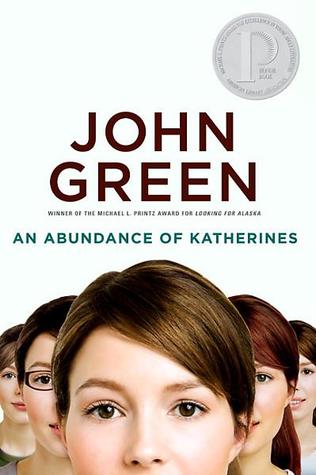 On a road trip miles from home, this anagram-happy, washed-up child prodigy has ten thousand dollars in his pocket, a bloodthirsty feral hog on his trail, and an overweight, Judge Judy-loving best friend riding shotgun–but no Katherines. Colin is on a mission to prove The Theorem of Underlying Katherine Predictability, which he hopes will predict the future of any relationship, avenge Dumpees everywhere, and finally win him the girl. Love, friendship, and a dead Austro-Hungarian archduke add up to surprising and heart-changing conclusions in this ingeniously layered comic novel about reinventing oneself.

“What is the point of being alive if you don’t at least try to do something remarkable?”

This was my second time around reading this book. If I had written a review the first time, I would’ve given this book two stars, maybe two and a half at the most. I’m really glad I decided to revisit.

Now, let me start off by saying, I LOVE John Green. As a person. I love the Vlogbrothers, (I’ve been a Nerdfighter for about five years now), love CrashCourse and Mental Floss and Dear Hank and John. But he isn’t the best author. Mostly because all of his characters tend to sound the same and have similar existential crises (had to look up the plural). But you know one thing John is awesome at? Ideas and Dialogues. His dialogues make you want to curl up into a thought bubble and play his words over and over again in your head.

All of his books focus on a big theme. This one is about mattering and how you will be remembered (similar to TFioS but less depressing). I think part of the reason I loved Abundance of Katherines the second time around is because currently, I’m in the same boat as Colin and Hassan. It’s the summer before college and I’m also thinking a lot about how much I matter and how I want others to remember me.

Colin is whiny and dramatic and sentimental and a guy. How many whiny/sentimental male MCs exist in YA? Not many. If a girl can kick a** (excuse the non-cussing), why can’t a guy be overly emotional? Now I would admit, if Colin was a girl, I would tell him to get up and get his act together but it’s nice to see the guy whining about a break-up for once. And when I say whining, I don’t mean sulking and brooding but I mean full on annoying sob-fest.

Hassan was by far my favorite character. He is Colin’s pudgy (his words) Muslim best friend. He is absolutely hilarious and I love that John Green doesn’t shy away from writing about Islam.

The math. Even though I didn’t understand most of it, I’m a math geek. I love math. I tell everyone math is my true love (right up there with books of course). So Colin spending most of this novel trying to write a theorem was more than okay with me.

Sometimes, the talk about all the Katherines gets a bit much. Guy or not, excessive whining is never a good thing.

Unfortunately, I still couldn’t give this book five stars because it just didn’t have a WOW factor. But I think AAoK just made my Favorite Contemporaries list.

7 thoughts on “Review: “An Abundance of Katherines” by John Green”